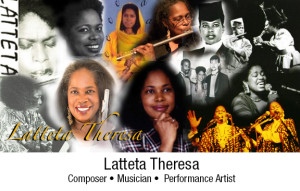 Visit my NEW website: WhenIgrowupOnline This website features my children’s book: When I Grow Up – A Fairy Tale or Is It? Interactive. Educational. Entertaining. Enlightening. Read the Story Storybook (grades 3rd – 6th), When I Grow Up – Vocabulary Words Workbook for grades preschool – 2nd Vocabulary Words Workbook (preschool – 2nd grades), Listen to the Story (Mother Earth’s children of all ages) STORY SOUNDTRACKS  Soundtracks

ReeeelaaaaX with Latteta is a musical work of songs designed to relax your mind, body and spirit. The music is crafted with sounds and tones which vibrate with soothing and healing energies. You are invited to take a journey into a world where you are safe and secure . . . a world of your own creation where you experience the most beautiful, and awesome landscapes and civilizations. Journey beyond the 3D world into the higher realms where you are the person you’ve always dreamed of being. There, you have permission to be all that you can be without limitation. Play hide and seek with the Angelic Beings in ‘Crystal Wanderland’ where they escort you through a fascinating forest of various crystals as tall as the tallest trees and as small as a blade of grass. Each song offers a different atmosphere and at the very end of your journey ‘Sleepy Time’ will take you into your dreamland.

Crystal Wanderland – When I wrote this piece I could visualize myself in a forest of tall, beautiful crystals, where Angels escorted me through the crystal forest. What do you do when your music requires bongos, but you don’t own a pair? You make your own out of two different size coffee cans; taping them together by binding them with gaffers tape and stuffing them with fabric. I taped pieces of cardboard to the topside of the cans to silence the tinny sound. I also had to tape my fingers to prevent them from being cut open on the can’s edge.

Camel Waltz – The titled was inspired by a visualization of a camel waltzing in the desert. Just the music for ‘Camel Waltz’ was composed while living in New Orleans 1992. It was selected as the winning composition for the Louisiana Jazz Composer’s Competition and is also part of a video by Kathe Sandler titled ‘A Question of Color’. Youtube: http://www.youtube.com/watch?v=TNVq3adFXGY you can hear ‘Camel Waltz’ at 1:18.

Celestial Prayer – Heavenly Celestial images paint the back drop for this piece taking you on a journey to the higher realms.

In The Name of Love, Let There Be Peace Now – Is a musical prayer. Without words I play from my heart, what I desire to see and the way I wish to live in harmonious communion with all my sisters and brothers of planet Earth.

Cherokee Masale (A Native American in India) – When I recorded flute and drums on this track I visualized a young soon to be Cherokee Chief traveling to India where he shared his culture with the natives there. They in turn shared their culture as well, blending both music and dance moves.

Middle Eastern was composed in New Orleans 1992. The flute part was not recorded until the scheduled recording date in 1997 and was improvised. I’m using a Yamaha DX7II, as well as Yamaha RX11 drum-machine, two 2 crash cymbals bell tree, and two large floating toms.

Passions from Heaven – When I created/improvised the flute part in 1997, I was so filled with love I cried. The power was so awesome it felt like an incredible energy wave of passion from heaven.

The Royal Wedding was composed in my head while sitting on my back porch in the summer of 1997. I could hear my flute playing this melody in my head accompanied by brass. This song was inspired by a couple from India for whom I would perform at their wedding. This song was played as the groom was seen coming over a grassy hill riding a white horse, dressed in traditional Indian garb of white cloth with golden braid and a hat with tassels. He and his horse were lead by a man dressed in a colorful costume. His bride and brides’ maids were wearing the most magnificent costumes. You might have thought you were on a Hollywood movie set.

Sleepy Time was originally 5:32 minutes long. Before there was the Compact Disk, cassette tapes were used. After listening to the track several times, I recorded my improvised flute part. I listened to it with the rest of the music and decided it needed another flute part. After listening to both flute parts play with the entire music track, I determined another flute part was needed. So, I improvised the third flute part as well. With the last song in the can, I proceeded to add it to the master tape. What do you do when the last song on your album is too long and just won’t fit at the end of this 30 minute format? Though the flute parts where improvised, they worked well enough on their own, without the music. With only 4 minutes left at the end of the master tape I was saved. The flute parts timed at 3:03 minutes.

“Though this recording was first released in 1997, the formula within is timeless.” Latteta Theresa

“Her music communicates directly to the soul. Her Flute transcends lyrics. It speaks a language only the heart can decipher.” CADENCE MAGAZINE

Soul Tech Gathering closing night ceremony with composer, musician and galactic music doctor Latteta Theresa. She begins her performance with a musical prayer of Gratitude, inviting her audience to join their energies and voices in the musical prayer.

After introducing the musical notes that form the chord to which Latteta plays her flute from her heart and soul, she instructs the audience how to proceed.

“Have gratitude for the opportunity to be part of this event At Soultech, for everyone who contributed to a warm-inviting-healing 5D atmosphere, your friends and family who supported you, for that extra money that showed up when you didn’t think you’d make it because you didn’t have enough, and for this magical-healing ECETI ranch. Feel the love for everything and together, we shall fill this sacred space with so much love that it overflows out beyond the field of dreams and into the world, raising the collective consciousness and touching hearts and minds of everyone living on the Earth.”

They began to aum. I got goosebumps and waves of love rushed over me. I sounded my finger cymbals then began playing the prayer on my flute with the audience. Wow!

Thank you everyone for making this one of the most energetically meaningful and memorable performance!